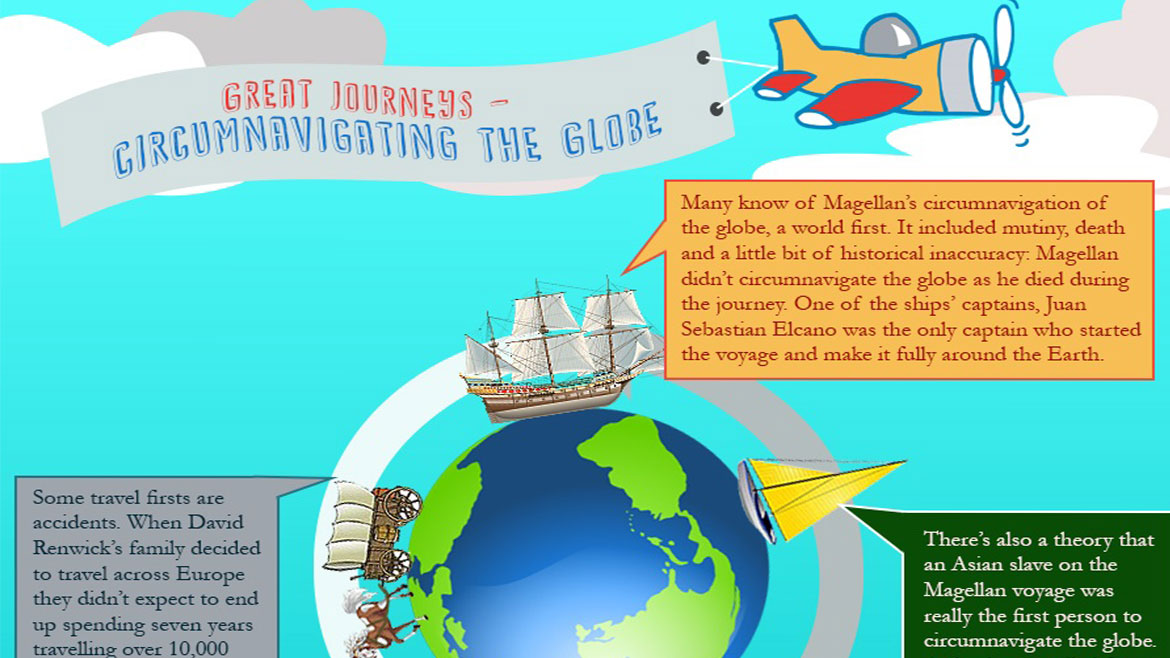 As a removals company we are fascinated by the great trips and travels people have made throughout the history of humanity. Sometimes we find it difficult to negotiate moving a piano through a tight corridor and we only have to go thirty feet from van to room so when someone circumnavigates the world powered only by the wind we have a lot of respect for them.

This infographic started when we were discussing how we would like to travel the world. One suggestion was on a tour bus. A large double decker coach that rock stars have when they need to travel between cities on a tour but there may not be direct transport. With the tour bus in mind a serious Googling session began. One of the discoveries we made was quite astounding and features a circumnavigation of the globe that we would imagine is a lot less comfortable than our tour bus will be.

And that’s what stands out, these amazing travels, going from one side of the earth to the other and back again is rarely a comfortable thing, and it is certainly not a holiday. Our tour bus would be about seeing sights and enjoying the amazing views and spectacles the world has to offer. The journeys featured in our infographic are not about amazing sights and spectacles rather they are amazing in their own right. They feature people who are dedicated and driven, people who see a challenge and set out to conquer it. Sometimes they had the backing of an entire country, sometimes they only had sponsorship from a few businesses, and other times still they only had the money in their bank account (and they hoped to replenish that after they realised they should write about their round the world trip.

Some of the greatest examples of humanity sacrificed their life to travel the world. A circumnavigation is no easy feat in modern times, let alone hundreds of years ago when the first round the world voyage happened (and there’s a little debate about that, as you’ll find out when you read the infographic.)

What we do know is that as we made this infographic we learned a lot. There is far more information about great explorers and adventurers than you could fit on an entire bookshelf, let alone in a simple infographic. We did our best to select our favourite facts (after some office arguing.) We hope you enjoy it as much as we enjoyed making it.

How to choose a professional junk removal company in Dublin!

Selling Your Home in Ireland

Buying a House and the Internet